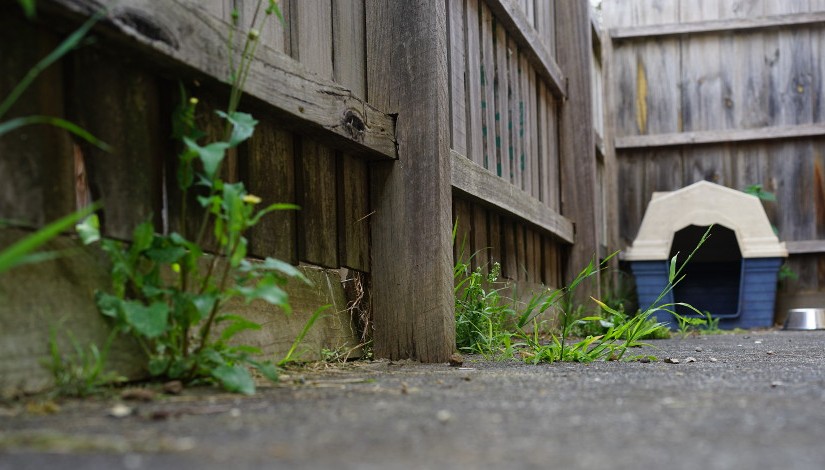 Strictly speaking, the dog in this story didn’t live in a backyard. He lived in the dark and narrow space between an old weatherboard house and the neighbour’s fence. He went to sleep in his kennel at one end of the run and to the toilet at the other. There was no grass and nothing to look at but the sky.

When I first saw this dog, he was looking at me through the window. I was about to rent a small room in an old weatherboard house and my landlady immediately assured me the dog “wouldn’t be any trouble”. Two of the other students who lived there were scared of the dog and the third didn’t care. The dog was never taken out and it seemed his only social contact was feeding time when someone would toss a bowl of food into his prison. Maybe he had been part of the family once but when life changed for his people he was no longer included. Maybe he lost a large and grassy backyard when his family built their new double-storey home behind the weatherboard house. Maybe he was banished from family activities when the first baby arrived. Plans to re-home him were soon forgotten and he became invisible. Stashed away behind the weatherboard instead of his family’s new house, he was out of sight, largely unnoticed by the students who lived there over the years. Without his occasional deep and husky bark it would have been easy to forget he even existed.

It was obvious that my landlady had no attachment to the dog. To her he was a deterrent for would-be burglars, nothing more. My landlord however seemed to have some feelings for the dog and maybe even a tad of guilt. I really wanted to believe that the man once loved and cared for his dog. It simply made me feel better to imagine the dog had seen better days, but staying on friendly terms with my landlord also made it easier for me to help the dog. My request to take him for walks was accepted without hesitation and so began his new life.

It didn’t start well. In my naive urge to set this dog free, I forgot to consider what years in solitary confinement can do to an individual. I put him on a lead, walked him a kilometre or so down the road to a creek which ran through large expanses of green grass and lush vegetation and let him off. Before I could blink the dog was running back to the road and heading for home, or so I hoped. I chased after him up a hill and towards a busy intersection where I prepared myself for the worst. When I finally arrived at the house, my heart was pounding from the exercise and the worry that he might never have made it home. To top it off – when I did discover him back in his kennel – I made a rookie mistake by getting angry with him. I was angry that he gave me such a fright. I was angry that he apparently didn’t appreciate my help. I was angry that he spoiled my feel good story. Today I’m angry with myself for having been so selfish and ignorant.

It was fortunate the dog didn’t suffer from serious anxiety as I could have easily made matters worse. Although I knew that anxiety and depression were real illnesses, I still had a hard time to accept that both could not be overcome with sheer willpower. Probably even more so through personal experience in my family, I saw it as a weakness if someone could not control their negative thoughts and emotions. And as if it wasn’t bad enough to expect humans with anxiety disorders to “face their fears” or “get over it”, I thought dogs – animals who aren’t even capable of analysing their fear and anxiety – should handle their problems the same way! This attitude is still very common these days and, sadly, it often leads to increased anxiety levels and a lower quality of life for our companion dogs.

As it turned out, the dog I was trying to help with my less-than-perfect approach had no deep-seated emotional issues and very quickly started to enjoy his newfound freedom. Over the following months we became best friends. Every day when I returned home and entered my room, he was waiting for me at the window. We went for daily walks together and sometimes hung out on the property when no one else was around. As often as possible I took him to the creek where we ran around together and sat in the grass. At night we would chat through the window before bedtime. Then I had to go away.

My first departure was only temporary but leaving the dog alone for three weeks, to fall back into isolation and despair, was unthinkable. If I ever had any ill feelings towards my landlord for neglecting his dog, it didn’t matter anymore after what happened next. My suggestion to board the dog with friends of mine during my absence was only the beginning. My landlord not only agreed but was also open for me to find a permanent home for his dog. Not long after my return I moved out of the shared house. The dog went to live with my friends before we found him a forever home where he became a member of a loving family, had another dog to play with and quickly claimed a comfy beanbag as his favourite place to sleep. I missed him but I knew he was happy. And that was all that mattered.

From the day I met this dog I knew I needed to find a solution. I could not leave him there to spend the rest of his life in a prison with nothing to do and no one for company. Yet so many dogs live exactly like that. Here, amidst us, scattered around the neighbourhoods are neglected, lonely dogs sitting in barren backyards, waiting for something to happen. Some of them have already entered a state of hopelessness and depression. They are “institutionalised”. But, as you can see from this story, it is never too late to help a dog in need and give them their life back. And no matter how long they have been neglected, they don’t even hold a grudge. I sometimes wonder if we deserve them at all.