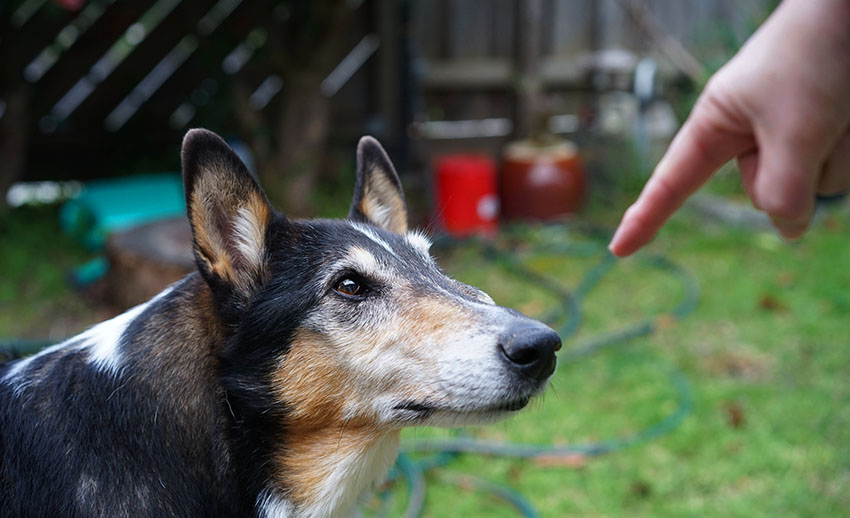 No has to be one of the most uttered exclamations by anyone living with dogs and, dare I say, kids. Of course, we have to control those little critters who seem to have nothing better to do than throw us challenge after challenge and make our lives difficult. They just don’t listen, do they? And, if our authoritative no doesn’t suffice, let’s just increase the volume and— voilà!—now we have their attention. For a few seconds at least. Then we’ll start over like a broken record.

Or maybe we belt out a formidable NO!! with such ferocity that everyone ducks for cover and gives us peace for the rest of the day. Ah, finally, we get the respect we so crave.

Except it’s all but a fleeting dream.

Yelling at someone to make them change their behaviour is not exactly what I would call a teaching method. It has—together with other forms of intended positive punishment—fallen out of favour with educators for good reason. Aggressive behaviour doesn’t just affect the well-being of our dogs, but ours as well. Like a quick meal at the nearest junk food outlet, it gives us instant relief but, if repeated, it gradually makes us worse.

Despite the short-lived benefits of raising one’s voice, the immediate result—in case your dog stops whatever they were doing—can be reinforcing. It’s easy to convince yourself that your strategy has worked. Let’s say you catch your dog chewing on the carpet. You yell NO! and the dog slinks away with tail low and quietly lies down on their bed. Success!

So, how do you feel ten minutes later or the next day when your dog is chewing on the carpet again? It may be time to revise your strategy.

Here is the problem: If your dog is highly motivated to engage in an activity such as chewing, be they a puppy, a recreational chewer or a dog seeking stress relief, they keep doing it. To counter this strong motivation, your threatening behaviour—in the form of yelling—has to be severe enough to have even the slightest chance of success. But even then, the dog’s behaviour is usually only suppressed for a finite time or as long as you are around.

Attempting to punish your dog’s behaviour with aggressive methods could even have the opposite effect, for example if the dog chews out of anxiety. Your aggressive behaviour gives the dog an even greater reason to be anxious, so they chew the carpet even harder to relieve their stress.

Now imagine your dog is anxious around the kids next door and growls at them. I’m sure you would be grateful that your dog makes their feelings known (so you can change them for the better) rather than turning those feelings into direct action. If you silence your dog’s voice by threatening them, what you fear might happen is far more likely to happen.

The Stern or Firm No

So how about we dial down the decibels and employ what is often referred to as the stern no or the firm no? Surely, this establishes our leadership and authority without the nasty side effects.

You might be in luck, if your target is human, of good hearing, sufficiently intellectually mature and dependent on your goodwill. Without the latter, well, at least you have a chance to start an argument. Try this with a toddler, a dog or a lizard and you can expect tantrums, disappearance acts or just plain indifference. Just like the loud no, the stern no is intended to stop the dog from doing something by exerting some sort of authority, so the tone tends to be threatening, regardless of the decibel level.

I suppose once upon a time commanding voices were thought to teach our children such grand values as respect, authority, discipline, obedience and loyalty. It seems odd that—while we have long realised that young children aren’t capable of grasping these concepts—we believe members of another species do a better job. Alas, a threatening voice does not teach your dog morality. They just learn to avoid you.

The Conditioned, or Learned, No

Because the word no, said in a resolute voice, has such a clear meaning to us humans, it is not really surprising that we use it with other animals as well. But, of course, a dog has no idea what the word no means unless—over time—they recognise a pattern and learn what happens after the no.

Let’s say your dog stalks your cat, prompting you to say no. Then, because your dog ignores you and starts chasing or pestering the cat, you get hold of the dog and put them in the laundry for a two-minute time-out. If you consistently repeat this pattern, your dog will learn that your no predicts time alone in the laundry, unless they leave the cat alone.

Time-outs can be highly effective, as long as you manage to deliver them consistently in a matter-of-fact way, without scaring the dog with either your voice or your actions. Once your dog has learned the pattern, they have a choice to avoid the negative punishment, i.e. the time-out. If you can pull this off, your no will take on the meaning of a warning. Congratulations. This is no simple procedure.

Reward-based dog trainers avoid the word no precisely because it has a default meaning to humans. It is almost impossible to deliver the word in a neutral tone, especially when your dog is about to do something you don’t approve of. To avoid slipping into the loud or stern category, it’s best to choose a more pleasant word or phrase as a warning (“gentle”, “easy”, “nope”, or how about the Aussie classic: “oi”), give a learned cue for cease & desist (“leave it”) or ask the dog for an alternative behaviour (come, sit, touch, fetch).

In reality, the word no is rarely delivered in a neutral tone nor on its own. Its delivery is forceful and it is often accompanied—rather than followed—by some form of action, such as rushing towards, staring at or leaning over the dog, throwing things at the dog or worse. Your actions overshadow your words just like your tone of voice does. So, the word itself is entirely irrelevant. You could use any verbal uttering, because your dog responds exclusively to your body language and noisiness.

The Most Appropriate No in Dog Training

The most appropriate use of the word no in dog training is the one where you simultaneously slap your forehead because you left your puppy alone with what used to be your precious new throw rug (management fail); or when you finally realise your dog never sits longer than a split-second because you consistently rewarded them after they stood up (sloppy training mechanics); or when your dog does an instant U-turn away from a sweet-smelling possum carcass after hearing your irresistible voice and you realise you left those super tasty treats at home (badly missed opportunity).