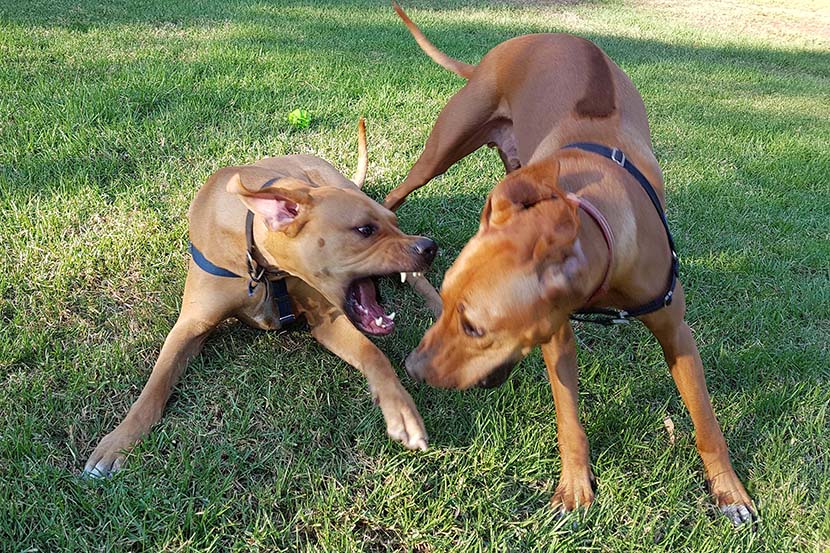 Once We Were Prey and We Adopted a Predator

When we are faced with sharp pointy teeth, like in the picture above, it triggers a primal emotion inside us. Sometimes the feeling can be so fleeting that we don’t even notice it—maybe because our experience or knowledge quickly overrides our initial emotions—but we all have it in us: the fear of predators. The reason is, of course, that we were once prey. Back in the days, before we had the power of stone, fire and steel, fear of predators kept us alive because we avoided them. It’s our evolutionary legacy that, despite having unleashed fire and fury on every creature we fear ever since, we cannot shake this quintessential element of basic survival instinct. And this fear has been exploited, and sometimes fuelled, by authors and script writers, from fairy tales to horror movies to news reporting.

It is entirely reasonable then that we fear our dogs. Even the tiniest handbag dweller can render your hand a useless limb with their little canines. And technically, although only a B-grade horror flick could have an entirely improbable story line where a Chihuahua severs a person’s carotid artery, death by toy dog is a possibility.

The reality is, the little monsters tend to get off scot-free, no matter how much they snarl, snap or even bite. We may even laugh when tiny Cesar bares his teeth at a 50-kilo Bullmastiff. “Little dog syndrome”, we casually say in their defence, while we drag the noisy ball of aggression away. Turn the tables and there isn’t much defensive rhetoric you can come up with. Some people quiver, if your square-headed companion simply sets eyes on their dog. Little do they know that Bullmastiffs—like the boy in the photo—are often the sweetest dogs. The adverse reaction to these dogs is completely understandable, though. Large, powerful dogs resemble our ancient predators so perfectly well whereas little cute fluffballs can hide their deadly teeth behind their button noses and doe eyes. But those miniature fangs are there, waiting for that ankle or finger or carotid artery. This is not to say that small dogs are more likely to be aggressive than big dogs, but because managing a small aggressive dog is considerably easier than wrestling a heavy-weight who’s blown a fuse, small dogs have better survival chances. We keep them alive and we keep them at home or on leash.

Their bigger conspecifics are rarely that lucky, with certain breeds copping it especially hard depending on the current fashion. One day it’s Rottweilers, next it’s Dobermans, then it’s Pit Bulls (more precisely: the American Pit Bull Terrier or any dog that looks vaguely similar) with their mythical “lock-jaws”. Those dogs lose their lives because of an image problem, no matter if they committed any offence or if their offence was ridiculously trivial. There is no rationality behind it other than our ancient deep-seated involuntary fear of predators. But, we modern day humans make plenty of lizard brain decisions, so it’s not really that surprising.

How Our Fears Can Kill Dogs

When dogs interact in play, they show us plenty of predator-style behaviours such as chasing, pouncing, showing of teeth, making contact with teeth and growling. And what do we do, more often than not? We intervene. We pull the dogs apart or restrain them and try to teach them with lots of “no” and “ah-ah” that aggression is bad. We want our dogs to play nice. We want calm and gentle dogs. We don’t tolerate anything that we deem aggressive behaviour. This is our lizard brain talking.

The reason this is so devastating is not only that many dogs lose their lives for no other reason than our fears, but that we often make things worse for them, much worse, with our fears. If we deny dogs to behave in a species-typical manner—and that includes aggressive or aggressive-looking behaviour—we may in fact create aggression problems that weren’t even there in the first place.

If puppies are not allowed to learn how to communicate with their conspecifics, future encounters with other dogs can be challenging, and even dangerous, because of misunderstandings, wrong or missing signals and defensive behaviour. We may raise our puppies to be illiterate in their own language, and all because we thought we could, or should, teach them to communicate nicely and in a way that didn’t worry us.

Just as dogs need to be able to talk to each other in their own language—teeth, barks, growls, tumbling, humping and all— they need the liberty to tell us when they feel threatened or uncomfortable. Punishing growling, snarling, snapping or any other form of antagonistic communication, be it directed at humans or other dogs, can create “silent killers”. How often a dog can tolerate being pushed to their limits of how much fear, anxiety and distress they can endure, only the dog knows. We’ll know once that dog bites.

Unless we accept that our dogs are a predatory species, for whom aggressive displays are a normal form of communication, and train ourselves to understand their language, we will always be slave to our lizard brains and make lizard brain decisions.

We can learn how to control our deep-seated fear of sharp teeth by watching lots of dog-dog play. I had an uncle who was one of those people who picked up a foreign language simply by immersing himself in that language. Mind you, his grammar and writing was shocking, but his communication skills were excellent. When it comes to dog language, we are still trying to figure a lot of things out. At least we have started to realise that we got quite a few things wrong in the past, mostly because we couldn’t resist interpreting their language using our own cultural and grammatical rules.

So, get yourself to a dog park during peak hour and watch. Depending on the attendees, you may see a large range of typical dog conversations. We have made things a little challenging for our dogs by creating such great diversity within the species, so you might come across the occasional problem due to dialect. But most importantly, look for those exposed teeth and snarly faces. Watch the fake fights. How are the dogs moving? Are they jumping around like excited kids? Are they taking turns? Does the one you thought was attacking the other suddenly fling herself on the ground, paws paddling in the air?

Watching dog play, and even the occasional altercation, provides an invaluable opportunity to learn canine language, but only if we free our minds from preconceived ideas. Let the dogs be our teachers. After all, they are the native speakers. If we can see dog behaviour for what it really is and learn to control our fears where they are unwarranted, we can safe lives. The more of us realise that most dogs are neither trying to kill each other nor us, the better we can make rational and compassionate decisions, as befits our species.