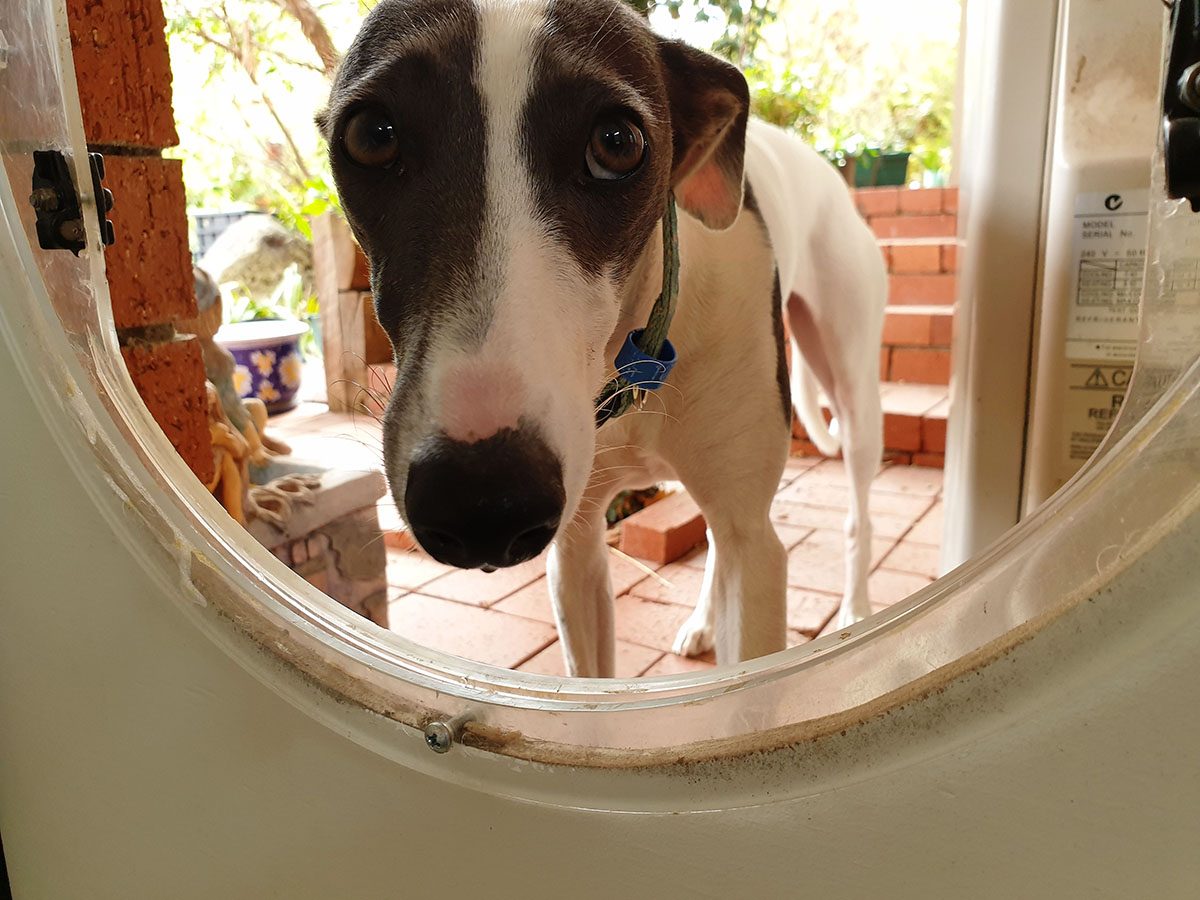 Dog doors offer a great convenience to fur parents to give their pooches access to outdoor spaces such as yards or balconies. Who wants to accompany their post-puppy-stage companion to the toilet spot every time nature calls, especially at night time? Depending on their age and health, it can also be rather inconvenient for your dog to hold it in. Some bodily organs have limited patience and no regard for convenience. So, if you come home or wake up to a mess, please never blame your furry friend.

Identify the Culprit Behind Your Dog’s House Soiling

When your dog soils the house, there can be a range of reasons. What is certainly not the reason for leaving unpleasant surprises on your beds or carpets is any sort of intentional depositing, for example out of ‘revenge’. Sometimes our brains are too complicated for their own good and spin a story where there is nothing but a simple cause and effect.

The reason your dog urinates and defecates in the house is typically one or more of the following:

The most simple explanation could be a medical condition, especially if your dog’s house training breaks down all of a sudden, so a visit to the vet is a good start.

Apart from physical ailments, mental or emotional problems can also play a role. Separation anxiety is commonly behind a loss of bladder or bowel control as are other forms of anxiety, stress and fear. Identify what your dog is distressed about—ideally with the help of a behaviour vet or animal trainer with proven expertise in behaviour—and, most importantly, stop any sort of punitive handling and training.

A rather common cause for house soiling is incomplete house training, so go back to basics. There is no magic bullet to teach your dog not to wee or poo in the house. It comes down to management, supervision and reinforcement.

Then there is the matter of access to the preferred toilet spot. Putting a dog door in for the dog to go out whenever they please seems like a great idea but your dog has to think so too.

Anything new you introduce into your dog’s life is best accompanied by yummy treats so the dog immediately forms a positive association with it. Nevertheless, some dogs may need further help to actually use the dog door without your assistance.

Here are some common factors that can affect your dog’s love or hate of the dog door.

size of the dog door

Make sure your dog can easily fit through the door rather than having to  squeeze their body through. Security may be a concern, in case you have a large dog, although having a large dog may also be a good burglar deterrent. On the other hand, I have had to squeeze my body through a dog door more than once to get entry to a house, so it certainly has its advantages, if you lose your house keys.

design of the dog door

There are a range of designs that can affect your dog’s liking of the door. Hard or soft plastic, see-through or opaque, round or rectangular. Consider how hard your dog has to push or how high they have to lift their paws to get through. Do your research, read reviews or, even better, test different doors before shopping.

location of the dog door

You may not have a lot of choices of where to place the dog door depending on the design of your home. Most commonly, dog doors are installed in backdoors or windows. But where exactly is the door leading to? If it rains, does the dog have to step out into the wet or is the outside space covered? Is it shady on hot summer days or does the pavement heat up so much that it feels like stepping on hot coals? What else could prevent your dog from stepping through the door? Maybe the neighbours kids’ trampoline is right next to the fence and your dog fears the jumping kids. Or maybe the neighbour’s dog goes berserk whenever your dog uses the dog door. Lots to think about.

ease of entry and exit

The location of the door may create additional obstacles for your dog to get in or out. I knew a Schnauzer who refused to step outside through the dog door but had no problem coming in. As it turned out, the step down from the dog door, which was built into the laundry door, was simply too high. The dog had trouble to physically bridge the height and she might have also hurt herself in previous attempts in doing so. Adding a little platform between the door threshold and the courtyard, so the dog could step outside without having to resort to acrobatics, solved the problem in this case.

An unfortunate encounter with the dog door, especially on first use, can easily create dog door dread. For this reason, I highly recommend introducing your dog to the door with a bag of yummy treats. With you on one side of the door and the dog on the other, encourage your dog to step through—initially holding the door open, if necessary—and then pay her with a treat and praise her for her bravery. Repeat this until the dog shows no hesitation when stepping through the door. Lots of positive experiences provide an ideal buffer against possible future mishaps.

If your dog does have a bad experience, such as getting stuck in the door or getting a fright by an external event, say a thunder clap, while going through the door, first consider the previous points and possibly make some changes to the dog door. Next, rebuild your dog’s confidence by teaching her, step by step, that the dog door means wonderful things, i.e. super tasty snacks.

Some dogs are generally afraid of novel things or lack the confidence to explore. The procedure to make your dog use the dog door is the same as after a bad experiences (tasty snacks!) but, if your dog has problems with more than just the dog door, I strongly suggest a consult with a behaviour vet. Living with anxiety is no fun for anyone!

During a recent house-and dog-sit with a pair of Whippets, I helped one of them overcome her dog door anxiety. Apparently, her fear of using the door arose after she was hit in the face by the flap when she tried to follow her brother through the door. The door in question was of round design with a hard-plastic flap, firmly held in place by magnets.

After the incident, Willow would only use the door, if the flap was held open. My initial advice was to temporarily replace the flap with a plastic sheet or fly screen and then gradually reintroduce the hard flap.

A simpler solution may have been to replace the door with a larger version and a soft-plastic flap. However, more assistance is usually required to rebuild confidence after a bad experience.

So, while I had the pleasure to stay with the Whippets, I spent a few minutes daily on behaviour building and counter-conditioning.

Breaking the Behaviour Down Into Manageable Steps

The first step was to get Willow to push the door open just a little with her nose. With me on the other side of the door and a piece of chicken held right at the bottom of the flap, she eventually managed to push—albeit quite awkwardly at first: pushing with her teeth!— and quickly snatch the treat before pulling her head back again.

Next, I had to prevent her from pulling back straight away, so I quickly fed another piece of chicken after the first one and so on. The goal was to get Willow comfortable with the feeling of the dog door resting on her head or neck for a few seconds.

Very quickly this seemed rather easy for Willow, so now was the time to move the food lure out of sight and encourage her verbally to push her head through the door before I reinforced her with a treat. The intention was to break the reliance on the food lure.

The next step was getting a leg through. This turned out to  be a rather interesting looking affair. Despite her small stature and spindly legs, it took Willow some trial and error before she figured out where and how to place her legs. Initially, I offered assistance by holding the door up and then slowly lowering it onto her back.

After managing to get her front legs through and collecting a few pieces of chicken with the flap resting on her back, Willow still tried to escape the scary door with a quick forward hop. It would have been disastrous, if she had pulled back at this stage and rammed the door into her spine, so keeping the forward motion going with treats was essential.

By moving myself away from the door very gradually and feeding repeatedly as I did so, I eventually managed to convert her panicky hop into a more graceful step-through.

From there I kept repeating a full step-through with lots of verbal encouragement and reinforcement with chicken to grow Willow’s confidence and comfort with the door. The chicken, or other food reinforcement, was now only delivered once she had mastered the entry or exit on her own. I also celebrated each success with plenty of praise.

I had transitioned from food lure directly at the door to reinforcement delivered at a distance from the door after a successful exit or entry. Now I needed her to be able to do it without me.

First, I increased my distance from the door and eventually walked out of sight, still using lots of verbal encouragement. I also used Willow’s brother as a draw card: I would go outside with him, closing the back door behind us and leaving Willow inside. I then made a point of first feeding him outside, then playing with him with lots of hullabaloo, and moving further and further away from the door. Willow, not wanting to be left behind, conquered her dog door dread faster and faster to join the party.

When my house- and dog-sitting time with the Whippets came to an end, Willow was able to go through the dog door without my presence and without encouragement or food offers. She had not yet managed to leave the house at night on her own when nature called, but I left with the confidence that continued practise and repetition, including at night time, would soon have her soar over that final hurdle.

And now I have learned that her humans have decided to install a bigger dog door with a soft flap! :)