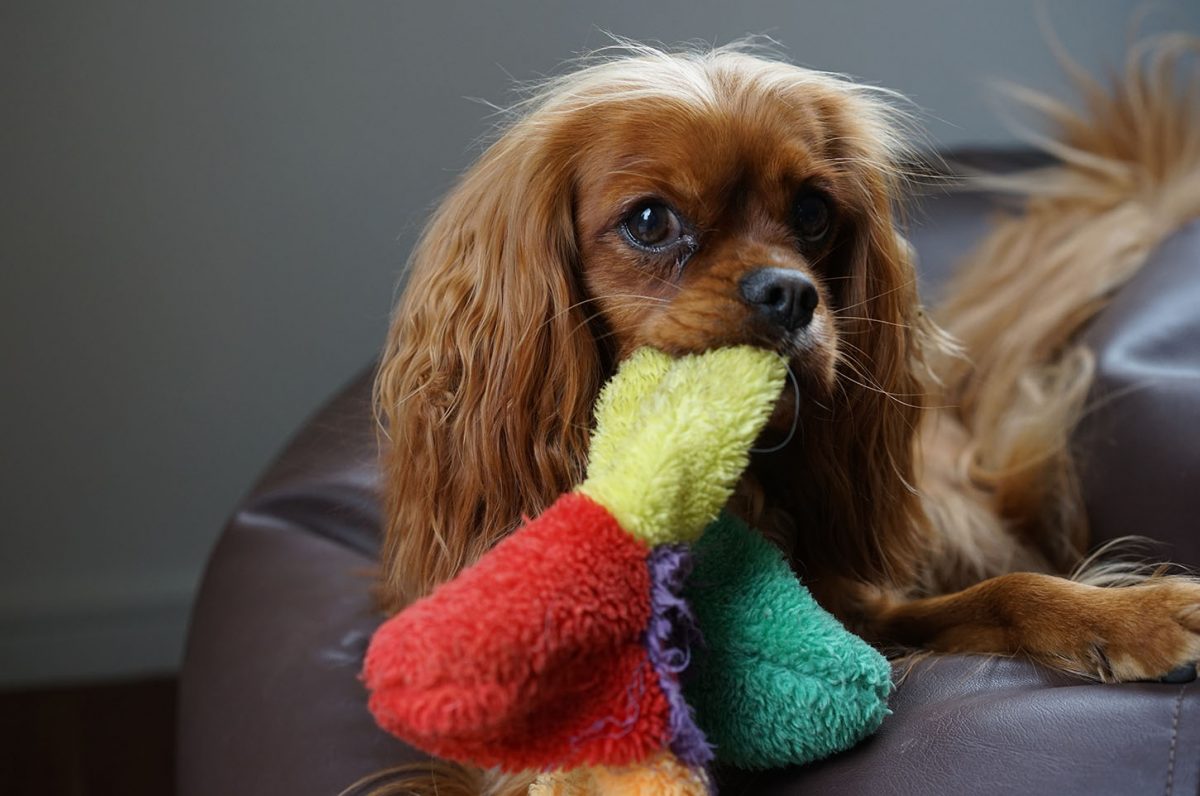 Minimalism is back in fashion. If you have been swept up by the latest decluttering movement, I do hope you stopped short of throwing out your dog’s toys. It sure feels good to let go of stuff, but do not expect your pooch to share your enthusiasm. Dogs do get attached to things. Some dogs get attached a lot.

Have you seen it in your dog? The body freeze when you approach, the hovering stance to shield the valued possession, the menacing glance from the corner of their eye. Did you think you could whisk that limp old bunny away from your dog, assuming it was worthless after having been thoroughly destuffed? Maybe your dog thought otherwise and—sensing your treachery as your fingers angled for the guarded treasure—promptly let out a growl?

Congratulations, if you have found liberation from hoarding by convincing yourself to let go of things. Your dog, however, will only become fiercer in their guarding with each of your attempts to pry things from their jaws or paws. They don’t feel liberated. They feel robbed!

When Letting Go of Things No Longer Means Loss, Your Dog Has No Reason to Guard Them

Holding on to important stuff (primarily: food, mates, a place to rest), even defending—or guarding—them aggressively, helped our dogs’ ancestors to survive and make more wolf babies, so no surprise the trait is still around. But despite the genetic link, it is possible to teach your wolf-in-a-dog-skin to no longer guard the things they value.

If you are worried about your dog’s behaviour, and especially if it goes beyond playing keep away and maybe a little growl here and there, I strongly recommend you work with a competent trainer. Not the type that tells you to be more of a “boss”, but someone who actually understands the process of desensitisation & counterconditioning. Someone who knows that positive reinforcement is the method of choice for the modern dog trainer, not overpowering and intimidation. They will assist you with a step-by-step protocol until your dog no longer feels worried about losing things of value.

For less serious cases there is another pathway which you can pursue. It involves teaching your dog to release things from their jaws on cue (e.g. “drop it”, “give”) and to refrain from picking something up (“leave it”). Both are very useful behaviours for any dog and are also a good add-on to the more stringent protocol for serious guarding cases. If you are diligent in your training, the desensitisation & counterconditioning required to change your dog’s guarding behaviour will come along for the ride.

Learning a behaviour with positive reinforcement has the very convenient side-effect of creating positive emotions in your dog: Emotions not only associated with the learned behaviour, but also the context of the learning experience and the person involved—you!

If your dog is a guarder, you want them to learn that relinquishing or forgoing a prized possession no longer equates to loss. To achieve that, you have to make it worth their while and return their temporary “sacrifice” with interest, i.e. a big fat—usually edible—bonus.

“Leave & Let Go”: Two Behaviours for the Goal of Trust

If you have one of those dogs who love to chase a tennis ball but are reluctant to let go of it, you have already witnessed the conflict that is tormenting your dog: They love it when you throw the ball, but they won’t give it to you. And, if you try to pick it up, they’ll beat you to it!

Some people opt for the easy solution of carrying two tennis balls. That’s fine, if the dog actually drops a ball to chase another. And, if they don’t learn to stuff two or more balls into their mouth, including one they pinched from another dog, and run off. Managing your dog’s guarding behaviour can be a workable solution, but it doesn’t help your dog one bit with resolving their emotional conflict.

To get your dog to willingly spit out whatever they hold in their jaws, you need your dog to trust you. Trust simply means that your dog has learned that good things come from you, if they let go. During “let go” training, they not only get the surrendered treasure back, but they get a sizable bonus on top of it. It’s a bit like spending $20 on a lottery ticket and then winning a holiday for two in Bali. Not bad, hey?

Your dog thinks so too. Or more precisely: dogs understand value. However, to let go of 20 bucks is not as easy for some as it is for others. If $20 aka a tennis ball is too much for your dog to part with, then a ¢50 rubber duck may be your starting point. Of course, the value of the item is not what you spent at the shops, but the value your dog attaches to it. To another dog your dog’s ¢50 rubber duck may be a treasure worth fighting tooth and nail for.

A Game of Tug: The Perfect Start for Learning to Let Go

Tug is a fun and high energy game. And, it is a good opportunity to teach your dog to let go of something. Here is how I do it:

As you play the game, randomly—but not too often (you want to have a fun game with your dog after all)—say your let go cue (e.g. “let go”, “give”, “drop it”, whatever you like) in a cheerful voice. Then, immediately put both hands over as much of the tug toy as you can and quickly pull it between your knees (so you can clamp it tight). Hold completely still until you feel your dog’s jaws soften their grip (it will happen eventually, just wait silently and do not move; do not repeat your cue). Praise your dog and—as soon as the toy is released—resume the game.

It is a good idea to also teach a “take it” cue or similar. Restart the game after giving the cue, but only if your dog does not lunge at the toy in your hand. One second of being patient is enough to begin with. That way your dog learns not to rip toys or other items out of human hands without invitation.

There are other, less physical ways to teach letting go, for example offering a treat after you say the cue. I prefer the above version, precisely because it is physical and because it keeps the game going. The tug game itself is the dog’s reinforcement for releasing the toy. However, each case warrants its own variation and fine-tuning, so decide what works best for you and your dog.

Over several games, you should notice that the dog starts releasing the toy faster and faster once they hear the cue. You can then start practising with other non- or lowly-guarded items, e.g. the ¢50 rubber duck. Gradually work your way from holding the item in your hand to letting your dog have possession of it before you give the cue. Reinforce the dog for letting go with a super yummy treat or throw the item (or another item), if that’s what your dog prefers, or both.

Important points to remember when teaching your dog to let go:

Never rip the item out of your dog’s jaws

If your dog doesn’t let go on cue, leave them alone and practise more with lower value items first. Also, adjust your hand position (and eventually your distance to the dog) to make it easier or harder for the dog to surrender the item (holding and touching the item with your hand is easier; being further away is harder).

avoid using a “commanding” voice when you give the cue

Dog training is not about threatening your dog with your tone of voice. It’s about building an association between the cue, the dog’s behaviour and what follows (in this case: reinforcement by resuming play or giving a treat). And, dog training is about consistent repetitions of carefully defined steps.

Use fabulous food for reinforcement

Food is still widely underused in dog training, and that although it is the easiest, most convenient and efficient reinforcement there is. It works for all dogs, because all dogs have to eat. Please don’t be one of those people who deprive their dogs of tasty food. Be generous and your dog will be happier and enthusiastically take part in whatever training task you give them.

Refrain and You Will Gain: Teach Your Dog the Value of Not Approaching or Touching Something

It would be an odd thing, if a dog snubbed freely available food within their reach. I’d assume they must have just eaten a massive meal (that wouldn’t be reason enough for many dogs, though!) or they are sick, stressed or anxious. Or, they have been asked to leave it alone.

Your dog can learn not to approach something, if—just like letting go—you make it worth their while. After you’ve taught them not to touch food, you can extend it to anything you want your dog to stay away from: The glass jar you just smashed on the floor, a person doing Tai Chi at the local park, even the cat next door.

Again, it is important to proceed in steps that allow the dog to succeed. Repeatedly placing food on the floor in front of the dog and saying “Leave it” may not be the best start, if your dog keeps going for it. Not only do they hear a cue over and over again, without forming an association with the behaviour of “leaving it” (which erodes the cue), but you risk frustrating your dog because you keep putting food in front of them but don’t let them have it.

Additionally, if you make it so hard for the dog that they keep “failing”, you may get frustrated too and blame the dog rather than your training approach. Before you know it, you are back to using a stern voice, or worse, and make your dog and yourself even more stressed. And that’s no longer positive reinforcement training. It’s not really training at all.

So, start easy. Avoid using the cue until your dog has learned the behaviour of “leaving it”. The protocol I follow (which I learned at The Academy for Dog Trainers) starts with food in a closed hand and reinforces the dog for a mere 1-second of not trying to get to the food. Just one second of impulse control and the dog gets the food. It sets your dog up for success and keeps them happy and engaged.

Have a Go, Take Your Time, Have Fun

If you are keen on DIY and your dog’s aggressive behaviour is not severe, give it a go. Even then, you may find consulting with a good dog trainer can point you in the right direction and save you some time.

Most importantly: Have a plan, i.e. a breakdown of how you are going to teach your dog the desired behaviours, take it one step at a time and have fun. Celebrate intermediate successes and generously reward your dog—and yourself!—for the effort.

Finally, here is Sebastian. He became more and more possessive over his tennis balls during adolescence. Although his growling was mostly directed at other dogs, he also grabbed the ball and ran whenever a human tried to pick it up. After a couple of weeks teaching “give” and “leave it”, going to the off-leash park has become a lot more fun again.