It’s a beautiful day and a couple and their two dogs are walking across a wide open field at a popular off-lead park. Gradually one of the dogs strays off, apparently following an irresistible scent near the trees. When the people finally notice that their dog has gone missing, the man shouts the dog’s name. The dog immediately lifts his head, briefly looks around to locate the source of the sound and, as the man shouts a second time, promptly runs back to his people. 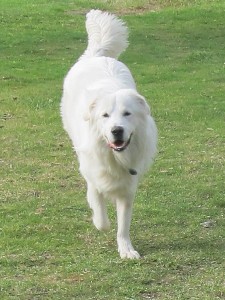 When I witnessed this scene the other day I was impressed. Despite being distracted and quite far away, the dog responded instantly to his person’s voice and quickly returned. In my book this was a “perfect” recall (coming when called). However, as I watched the dog return to his family things did not unfold as I expected. Instead of praising and rewarding the dog for his stellar performance, the man immediately commanded the dog into a sit, grabbed his muzzle and gave him a stern talking to. Now, I have seen worse being done to a dog for so-called “disobedience” but I was very disappointed by the man’s reaction. Apparently he was completely oblivious to the missed opportunity and the potential damage he had just done. What was going on here?

The answer may be found in the nature of the human mind and in particular its capacity to ponder the perceptions, thoughts, feelings and intentions of others. Known as Theory of Mind, this mechanism allows humans to attribute mental states to other people as well as themselves. It plays an important role in social interactions as it allows us to understand, predict and feel for others, but also to manipulate, judge and deceive others. Unfortunately we also routinely believe that we know what non-human animals think or feel and this is when Theory of Mind becomes a liability.

Here is what Daniel Povinelli, a prominent chimpanzee researcher, has to say about the ‘distorted’ human view of animal minds:

“Faced with the overwhelming similarity in the spontaneous, everyday behaviour of humans and chimpanzees, how can someone like me – someone who has dedicated his life to studying these remarkable animals – entertain the possibility that their minds are, in profound respects, radically different from our own? How can I challenge the received wisdom of Darwin – confirmed by my own initial impressions – that the mental life of chimpanzees is best compared to that of a human child?
Actually it’s easy: I have learned to have more respect for them than that. I have come to see that we distort their true nature by conceiving of their minds as smaller, duller, less talkative versions of our own. Casting aside these insidious assumptions has been difficult, but it has allowed me to see more clearly that the human mind is not the gold standard against which other minds must be judged. For me it has also illuminated the possibility of creating a science that is less contaminated by our deeply anthropocentric intuitions about the nature of minds.”

If even science is “contaminated” with anthropocentrism, as Povinelli puts it, then maybe it’s not so surprising that most people treat their dogs like human children who need to learn “obedience”. Without necessarily subscribing to the idea that the minds of chimpanzees and other animals are radically different, I think Povinelli points to an important problem not just in animal research but in the wider public, namely the perception of animal minds as lesser versions of the human mind. Humans have a long history of viewing animals as less refined and less intelligent life forms while considering themselves as the “crown of evolution”. Fortunately we are seeing a shift away from this sense of supremacy and towards a better understanding that non-human animals are not less developed but simply different compared to humans. Each species has their own distinct features, optimized for the environment they naturally live in, and their behaviour and abilities only make sense when viewed in that context.

So, going back to the scene at the park, what can be said about the man’s behaviour towards his dog and what are the potential ramifications?

By scolding the dog after calling him back the man demonstrated

Trying not to fall into the same trap of assuming to know what the dog was thinking, here is my take on what the experience might have been like for the dog:

The dog picks up a scent and follows it. This is perfectly normal dog behaviour without which his wild ancestors would not have survived. To assume that the dog would ponder the consequences of his actions other than hoping to find something of interest is without foundation. Once on the trail the dog continues undisturbed since neither do his people pay attention nor does the dog seem to be aware of the separation from his family.

The dog hears his person’s voice and immediately responds to it, looking slightly confused as if woken from a slumber. He then runs to his family as soon as he spots them in the open field. Maybe whatever had drawn his attention previously was not that appealing after all. Or maybe he was worried because he didn’t know where his family was. Maybe he had previously been trained successfully to come when called or maybe a bit of everything contributed to his quick response – who knows.

Although the dog seems at first happy to run back to his family, his body language changes as he gets closer. On approach he lowers his tail and assumes a slightly cowering posture suggesting he is uncomfortable or even afraid. He stands still as the man holds him by the muzzle and talks to him. Afterwards the dog continues for a short while with tail low before returning to normal.

At any stage the dog seems to directly respond to the current events in his environment: the scent that causes him to change path, the voice that makes him pay attention, the sight of his family which makes him happily run to them, his person’s threatening body language which makes him cower. There is no reason to believe, and no research to support it, that the dog understood that following the scent was somehow ‘wrong’ and that he will refrain from doing so in the future because his human got angry. In fact, according to everything we know about animal learning today, the dog will most likely associate approaching his person with a negative experience and avoid that person in the future in a similar context (assuming the dog experienced the muzzle grab and ‘lecture’ he received as punishing which – judging by the dog’s body language – seemed to be the case). I’m quite sure this is not what the man intended.

The only way to prevent such disasters is through knowledge and awareness. By actively keeping one’s own mind in check whenever the temptation arises to make assumptions about the thoughts and intentions of another species, solutions to real or perceived problems could become a lot easier and – most importantly – a lot more humane.

So, here is what a correct application of animal learning principles looks like when teaching your dog the recall:

Daniel John Povinelli, Behind the ape’s appearance: escaping anthropocentrism in the study of other minds. Daedalus, Journal of the American Academy of Arts & Sciences, Winter 2004, Vol. 133, No 1, Pages 29 – 41.

Daniel John Povinelli, Behind the ape’s appearance: escaping anthropocentrism in the study of other minds.