A young woman arrived at the off-leash park with her small fluffy dog in tow and set off on a brisk march. As the dog fell behind to cautiously investigate me and my canine companion I noticed a rather large device strapped around the dog’s neck. Surely enough the woman was carrying what looked like a remote control in her hand. After a brief sniff from a safe distance the little remote controlled dog suddenly growled at us, did a big shake off and rushed after the woman. Had she just pressed the button?

The encounter was not just distressing because of a tiny dog wearing a gigantic shock collar but because the woman seemed so entirely disconnected from her dog. While she marched around the park she only rarely glimpsed over her shoulder, but even when her dog was out of sight she didn’t stop or call the dog. Periodically the dog performed a body shake and then rushed in the woman’s direction. Of course I can only speculate if and how often she pressed the button on her remote control, but this short and memorable encounter made me wonder if this woman had ever attempted to train and build a relationship with her dog. It also made me wonder if she simply walked into a store and purchased the device or if it was recommended and fitted by a dog trainer. Was it really possible that she had no doubts about using a shock collar on her dog?

“The convenience of solving dog training issues with a simple device may be tempting but it seems just as bizarre as trying to remote control a child.”

I’m afraid so. It is very possible that many people simply see nothing wrong with using such manipulative devices on their dogs. And I don’t believe at all that these people are cruel and want to hurt their dogs. Rather I think that a) they are made to believe that using shock collars and other aversive equipment is perfectly OK or even necessary and b) they want to believe it.

It is understandable that people put their trust in anyone who claims to be an expert and have their problem solved on the spot. The promises made by proponents of shock collars have the same purpose as any other promise made by businesses or politicians: to sell something. Only inquisitive minds can detect false, flawed or dangerous promises. But this requires time and effort – an investment which is often too much for people with busy lives. It is not surprising then that technology to control one’s dog is so easily accepted. The decision is made easier by the fact that no one who promotes shock collars actually uses the term “shock collar” as this would be risky in terms of marketing. And, repeated assurances that the collars are perfectly harmless help to convince even those who might have some lingering doubts.

The convenience of solving dog training issues with a simple device may be tempting but it seems just as bizarre as trying to remote control a child. Why did we ever think it was OK to use electricity to control the behaviour of our dogs? If someone claims they love their dog but at the same time reaches for shock collars and other wretched gadgets, what kind of love are we talking about? Something is missing if there is no consideration for exactly how a dog experiences the invasive treatment. It seems contradictory that we anthropomorphise dogs to the extent that we do (“she knows she shouldn’t”, “he feels guilty”, “she is stubborn”, “he steals food”), but at the same time we deny them “personhood” when it comes to their capacity to suffer at our hands.

What doesn’t help the situation – and what might be one reason for it – is that dogs largely endure us no matter what we do to them. They may very well communicate their pain, stress or discomfort, but dog body language is unfortunately poorly understood, even amongst people with long term exposure to dogs. This makes it easy to overlook possible ill effects of aversive devices such as shock collars, citronella collars, choke chains and so on. What we can’t see doesn’t trouble us.

“Our rush towards quick fixes for dog behaviour problems has encouraged an entire industry that deals with making our dogs’ lives miserable.”

Did I just mention citronella collars? Yes, I did. These scent-dispensing collars are commonly used to discourage dogs from barking. They sound harmless enough but who are we – with our poor sense of smell compared to dogs – to judge if they are harmless to dogs? For all we know, citronella could be as disgusting to a dog as cat urine sprayed in your face is to you. Of course this is exactly the idea behind the device. Only if the experience is bad enough will it stop the dog from barking, or not. The result largely depends on the dog’s motivation. Whatever it is – loneliness, boredom or an external event (e.g. noise in the neighbourhood) -, something is causing the dog to bark and if that something doesn’t go away, the spray collar may not be sufficient to suppress the barking. What it most likely will achieve though is an increase of negative emotions in the dog. Even more reason to bark.

Citronella collars may not hurt or potentially burn the skin as shock collars do, but they can be just as psychologically damaging for a dog as something considered harsh or painful. No matter what type of technology is used to torment a dog, it’s never acceptable. And this is where even educated and advanced human societies currently fail dramatically. The same societies who continuously improve animal welfare standards and even fight for animal rights have pet shops filled with torture equipment for their most beloved animal companions. Our rush towards quick fixes for dog behaviour problems has encouraged an entire industry that deals with making our dogs’ lives miserable.

“Imagine an alien planted a little buzzer in your ear and every time you laugh out loud the buzzer goes off.”

There are times when it all becomes too much and we just want to switch someone off. Remove the stress from our lives with the push of a button. But just as we have learned to live with other people we have to learn to understand and respect our dogs’ behaviour if we want to share a harmonious life with them. Trying to see things from the other person’s perspective or – in this case – trying to imagine what your dog might experience helps a lot.

Imagine an alien planted a little buzzer in your ear and every time you laugh out loud the buzzer goes off. At first you are surprised. You might shake your head, possibly thinking there was an insect trapped in your ear. After the buzzer goes off again and again you eventually make the connection between your laughter and the buzzing sound and you become confused. You might even try not to laugh anymore but what if you are out with friends having a good time? By this stage you probably hope to wake up realising it was all just a nightmare. But it continues day after day. First it drives you mad. Then a feeling of helplessness washes over you. You become depressed, frustrated and maybe aggressive. Of course if that really happened to you, you would see a doctor before you go insane. Sadly, your dog doesn’t have that option. Their only hope is you. 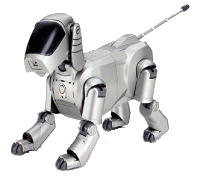 I have no idea where we are headed but it makes me sad that there is a thriving market selling all sorts of devices that are meant to cause pain, fear and frustration in our dogs. If this is going to increase as our population keeps growing and our lives are becoming ever more frantic or if people will find the compassion within them to invest a little more time to help their best friends – who knows. As long as people who are in need of help with their dogs fall victim to the promises of quick solutions we will continue to see the fallout in form of stressed, surrendered and euthanized dogs who could have lived happy lives but never got the chance. If this is where we’re headed, my sincere hope is that more consumers will choose these instead:

4 thoughts on “The Remote Controlled Dog: Is this the Future of Dog Training?”