Humans are smart, right? Not only are we capable of impressive mental gymnastics because of those uniquely complex brains of ours, we also understand more and more exactly how our brains work. We have come a long way in finding out what we share with and what sets us apart from other animals’ brains. This is how we know that dogs think differently from us.

Dogs are smart too. But their mental capacities and brain functions have evolved to accommodate a different lifestyle to ours. When training our dogs we need to keep this is mind. Unfortunately, neither the still popular “alpha dog” techniques, which are supposed to teach your dog that you’re ‘the boss’, nor expecting our dogs to be moral creatures and do things out of the goodness of their hearts are considering the true nature of the dog. Not very smart on our part. 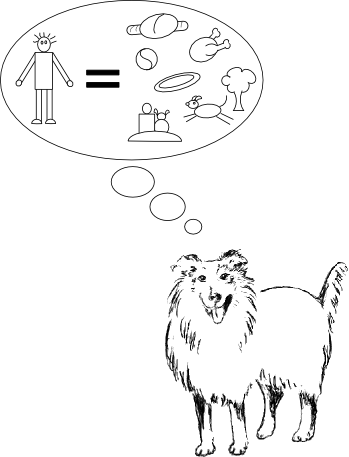 Understanding a dog’s intelligence and behaviour is essential if we want to find the best approach to living with and training our dogs. It is more scientific, more efficient and ultimately more humane than many current dog training methods. A dog’s behaviour is firmly based in the evolutionary history of the species which equips each individual with the necessary toolbox for survival and reproduction. Intelligence then could be described as possessing the complete toolbox and being able to use these tools to one’s advantage. This can differ significantly between dog breeds. Artificial selection by humans has enhanced certain traits in dogs while neglecting or sacrificing others and we did so purely with our own agenda in mind. Now we are left with a large variety of abilities and temperaments in our modern dog breeds (not to speak of the myriad of genetic diseases and malformed bodies).

When we talk about a dog’s intelligence, we usually refer to her ability to respond to us humans, for example how quickly can this dog learn a specific command or solve a task set by a human mind. While we can see the relevance for a dog to respond to human commands, they do not have the capability to ponder the long term consequences of their actions. A dog does not know what her future might hold if humans do not approve of her. The dog’s genetic legacy is that of a hunter-scavenger who survived and prospered by locating and killing prey, fending off competitors, escaping injury and finding mates. This is far removed from the life we force upon our dogs today when almost everything we ask of them goes against their natural instincts. If they can’t cope, it’s certainly not their fault. 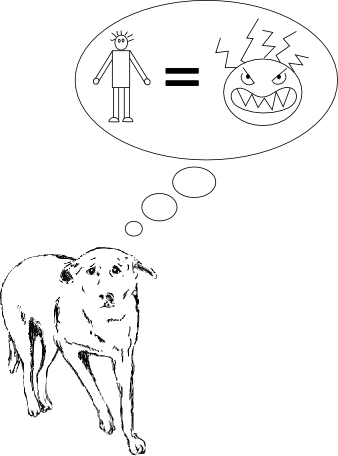 What does this mean for modern dog training? Firstly, the recognition that dogs instinctively do what is right for them – and not what is right for us – and that this is a perfectly normal result of their genetic makeup can help us understand our dogs better. Secondly, by knowing what is normal dog and breed specific behaviour we can use this knowledge to our advantage and train them better. And thirdly, by refraining from judging our dogs’ intelligence by criteria that only we find relevant, we can appreciate our dogs better.

A dog’s world view is primarily shaped by experiences in the form of “if A happens, then B happens”. If your friendly neighbour regularly gives your dog a sausage, the dog will make a connection: neighbour means tasty food, i.e. “neighbour = good stuff”. The same rule can be applied to the dog’s own behaviour. If – let’s say every time your dog jumps up at you – you throw him on his back and pin him down in an attempt to perform an “alpha roll”, your dog will learn that jumping up results in being rolled over. What happens next is entirely dependent on how your dog experienced the event: was it scary or was it fun? If it was scary, chances are the behaviour of jumping up will decrease, which means the behaviour was punished. If the dog enjoyed being thrown on his back – maybe because he perceived it as play – the behaviour of jumping up will likely increase. The behaviour was rewarded and hence reinforced. What will likely not happen is that the dog becomes more obedient because he somehow realizes that his human is dominant over him.

Social status and dominance hierarchies are human concepts. While we can observe behaviour that we label ‘dominant’ or ‘submissive’ in many other animals, this is quite different from our human understanding of social status today. In modern human society the term ‘dominance’ has been largely disconnected from the original purpose of gaining or retaining essential resources. Although social status can be related to socio-economic status, humans also tend to consider social status as a goal in itself. Honour and self-worth come to mind. Judging by everything we know today, there is no evidence that dogs use so-called ‘dominant’ displays in any other way than to obtain or defend valuable resources. Dogs don’t fight for something as abstract as status or glory. They don’t spend their days contemplating their relationships with other individuals and think of ways to become more dominant over them. Even if they did have a grasp of how their lives fit in with ours, they would probably quickly realize that we control all of their resources. It’s a needless worry that there may be a status contest between dogs and humans.

At the very least then, alpha rolling your dog or using other confrontational methods in an attempt to establish yourself as the dominant ‘pack leader’ could be considered a waste of time and energy. In reality, however, it’s worse. For most dogs being subjected to any sort of violent and threatening behaviour is a scary experience. It creates fear and avoidance of the person who subjected them to the experience. It can also cause fear and phobias of certain contexts and situations and it can trigger a whole range of other problem behaviours including aggression.

By sticking to the simple “if A, then B” principle, we don’t need to fish for complex explanations for our dogs’ behaviour. By actively avoiding intentional or accidental anthropomorphising (there it is –the ugly word!) and the projection of human values and abstract concepts onto a different species we are off to a better start in our relationship with dogs. We have the power to modify our dogs’ behaviour without frightening them, simply by focussing on how behaviour is triggered and how it is either reinforced or discouraged.

Life is better with wine and sausages

Using reward-based training methods is safe and humane as it carries none of the risks mentioned above. Rewards can be whatever your dog fancies, but food is by far the most convenient reinforcer. There is nothing wrong with using food. It doesn’t ‘corrupt’ a dog, just as accepting a nice bottle of wine for helping a friend move house doesn’t corrupt you. You would have helped anyway, right? But what if your friend moves house every six months? When does it become too much effort for you to keep doing it out of the goodness of your heart? Yet this is what we generally ask of our dogs, creatures who do not possess our moral values and ethical codes. We expect them to do things that they would never do voluntarily, whenever we want, and we expect them to do it for free!

Is it really too much to ask that our dogs be rewarded for doing what we want? Why deny our dogs – or ourselves – the good things in life? Force-free dog training methods based on positive reinforcement strengthen the bond with our dogs instead of making them fearful. As a consequence they are more likely to comply with what we ask of them in the future and less prone to develop behaviour problems. Happy, well-behaved dogs make happy people. It’s a win-win situation.