Human language is powerful. It enables us to express what we think and feel but it can also influence how we think and feel. Language can be wielded by people to shape opinions and it can serve to reiterate and confirm cultural norms and beliefs. Throughout history we have used language to discriminate against people based on their race, gender, religion or customs but we are also continuously adapting our language to reflect progress and changes in our societal values and sensitivities.
At present we are experiencing a change in the language related to dogs and dog training in parallel with a more informed and humane treatment of dogs and other non-human animals. 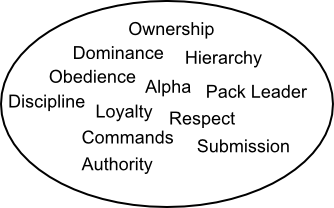 How we talk about dogs

The language of dog training has traditionally, and not surprisingly, been full of human-centric terminology. Dogs are expected to follow commands, be obedient and loyal, understand discipline and authority and respect their masters. Normal dog behaviours such as barking, chasing, chewing, digging or jumping up are considered behaviour problems that need to be fixed, commonly via some sort of punishment. Good dogs know right from wrong and want to please their owners.

After observing wolf packs we decided that dogs are pack animals and therefore needed a leader which fitted nicely with the human notion of social status and rank. A dog owner is meant to adopt the position of the alpha dog and assert their dominance over the dog. The dog must rank lower in the hierarchy and know their place. Manoeuvres such as alpha rolls, muzzle grabs or scruff shakes should be employed to force the dog into submission as they are considered natural wolf behaviours.

In addition to being subordinates, dogs occupy an even lower status of course: they are property. To classify a dog as property endorses the view that dogs are tradable and replaceable goods. We breed them, buy them, sell them, treat or mistreat them and kill them as we please.

Much of the traditional language in relation to dogs is still around in the 21st century but it feels increasingly awkward and out of date. The dominance lingo never made much sense to begin with and it is not how most people want to treat their dogs these days. This change in perspective is a logical result of our ever growing knowledge of the nature, needs, and emotions of dogs as well as the general abandonment of force in teaching. We have been gradually shifting our thinking to include more of the dog’s point of view.

The language of change

Every “rights movement” has its own story of language. At first, certain words are identified as offensive, for example as racist or sexist, and then they are banished from the general vocabulary. How big a role can language play in generating change? Does the way we talk about our dogs influence how we view them and subsequently how we treat them? If so, adjusting our language and dropping the jargon relating to dominance and ownership may help accelerate the spread of modern dog training.

We are already hearing less about dogs having to respect their owners and more about the need for people to respect their dogs. Overall, we are seeing a move away from confrontation and towards cooperation – something we humans are actually quite good at, even if that’s hard to believe sometimes.

The signs of advanced methods and attitudes in dog training are everywhere. People are learning more about dog body language and how to notice signs of discomfort or stress. Dogs are given space and children are taught how to behave around dogs. Positive reinforcement is fast becoming the preferred training method and is replacing the disciplinarian corrections. Commands are being changed to cues, obedience is giving way to life skills and dog owners are more often referred to as dog parents or dog guardians. Dominance first morphed into leadership and now leadership is falling out of favour too. The maxim Nothing in Life is Free is yielding to Plenty in Life is Free.

It seems we are starting to treat dogs as those best friends we always claimed they were. We are dropping force and intimidation from the tool bag of dog training and replacing it with science and compassion. We are finally letting dogs be dogs instead of moulding them into our concept of a human-dog social hierarchy. There is increasing acceptance that we share our lives with members of a different species who have a right not to be humanized. And all of this is reflected in how we talk about dogs.

There is another aspect to language in dog training and it’s ugly. It shows a deep chasm in today’s dog training industry. First, there is the direct combat between dog trainers of different camps, which is mostly played out on social media with its usual share of vitriol, and then there’s the far more dangerous war of words directed at the public. Potential clients and anyone interested in dog training are the real victims when dog trainers talk about each other and themselves.

Apart from the name calling and sledging of the competition, it is the warped, confused and pseudo-scientific gibberish that is mostly concerning. It is facilitated by an industry that lacks requirements for formal education and accountability. You don’t need a piece of paper to be a dog trainer. All you need is clever language to convince your clients that you are a dog training guru. As long as your clients see results, you are in business. Since the dogs you train – with whatever methods – can’t speak up, your only problems may arise from the occasional knowledgeable or concerned client who dares to ask the right questions. Long term, however, you should be worried about a tightening of animal welfare laws and mandatory licensing for dog trainers. It’s already happening in other countries, so it’s best to be prepared.

The biggest disservice to the public is done by trainers who make unsubstantiated and misleading claims about their own and other trainers’ methods. A layperson may be able to look beyond language which aims to insult or ridicule other trainers, but they may not have the knowledge to detect false or worrying statements in relation to training methods and results. Dog training is a science. If a dog trainer is not able to talk expertly and clearly about the scientific principles behind training, they are not credible. Throwing some technical jargon around which a client can’t verify or boasting with decades of experience (doing what exactly?), has nothing to do with proving one’s expertise and up-to-date credentials. Making nasty comments about the motivations, character or ethical values of other trainers is also not helping.

Speak clearly, change your tune or fade out

The fact is that many dog trainers have been using whatever methods they want to successfully* train dogs for decades. The debate is not about what works or what doesn’t work. It’s about what works with using the most dog-friendly and risk-free approach, in other words employing the least invasive training methods with the minimum risk of causing detrimental outcomes. And that is where many dog trainers fail their clients, either intentionally or because they don’t know any better: they simply aren’t upfront about exactly what will be done to the dog to achieve results and how this may affect the dog and their humans in the short and long term. Of course if the only objective of dog training is to get the dog to do or not to do something, regardless of potential risks for dogs and people, then any methods are equally valid. The choice remains ours, at least for now.

Fortunately more and more dog trainers are joining the ranks of an educated, scientifically literate, humane and progressive community. It is echoed in how we talk about dogs and dog training but also in the increasingly acrimonious language amongst dog trainers. Every societal change inevitably creates resistance. For some people change can be inconvenient or even frightening. It may challenge their long held beliefs or even their livelihoods. But progress is a necessary and inevitable element of our society and no amount of kicking and screaming can stop it. You can either hop on board or you will be left behind. The choice is yours, for now.

* The term “successfully” here is used strictly as a measure of satisfying the trainer’s objectives, not as an evaluation of the quality of training