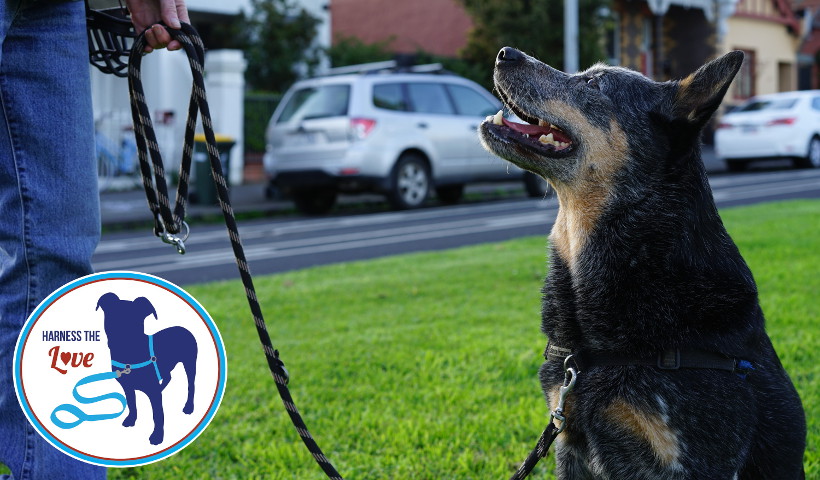 Wouldn’t it be great if we didn’t have to walk our dogs on leads? If they could just run free and make good decisions, such as not to run across the road to check out another dog or threaten to catapult a cyclist off her bike or jump on the man having lunch on a park bench.

It’s a nice fantasy that our dogs leisurely stroll alongside us without the need for physical restraint despite all those distractions our world has to offer. But it’s usually just as fantastical and risky as walking along a busy road with a toddler and not holding their hand. Since dogs are generally faster than toddlers and even less capable of understanding ‘appropriate’ (according to humans) behaviour, putting them on lead is usually the safest option. And of course in many places it is the law.

“Most walking equipment has the number one goal of stopping the dog from pulling, rather than considering the comfort and welfare of the dog.”

There are various types of equipment that can be used to walk your dog. The problem is that manufacturers and sellers generally don’t disclose potential side effects. This negligence is often not because they intentionally try to deceive, but because they are unaware themselves. Most walking equipment has the number one goal of stopping the dog from pulling, rather than considering the comfort and welfare of the dog. Perhaps it is understandable that we put human interests first, but the consequences can be dire.

“When did we ever forget that necks are sensitive parts of the body and need to be handled with care?”

Why someone came up with the idea that strangling a dog is an appropriate method to change their behaviour in the first place is concerning, but even more mindboggling is the fact that plenty of dog handlers continue to do this, even though there are much better alternatives around these days.
If your dog continuously pulls on a collar (any collar) or if you repeatedly “pop” the leash, so the collar violently pushes against the dog’s neck, the risk of injury and even death is very real. When did we ever forget that necks are sensitive parts of the body and need to be handled with care?

“A dog cannot make rational decisions, such as not pulling because it may compromise their health.”

Apart from physical risks, strangling and “leash pops” do nothing to create a pleasant walking experience for either you or your dog. Worse, your dog may associate you or anything they encounter on the walk, such as other dogs, cyclists, children etc. with being yanked or strangled and create emotions of fear, anxiety and even aggression. If your dog seems undeterred by the pressure on their neck and pulls despite coughing and gagging, it does not mean that your dog will not suffer physical or emotional damage. A dog cannot make rational decisions, such as not pulling because it may compromise their health. A dog makes decisions based on what they want at the moment and the history of reinforcement they received from getting it in the past. If they want something badly enough, discomfort or even pain may not deter them.

“It requires conscious effort to remember that dogs don’t do things to annoy us but because they engage in normal dog behaviour.”

Only yesterday I watched a woman angrily yanking on her dog’s lead several times while telling him off for pulling. The dog’s “crime” was that he rushed towards another dog while the woman was getting poo bags out of the dispenser, causing her to briefly lose her balance. She hauled the dog back, continued to fiddle around with the dispenser, then continued walking and THEN started the yanking and yelling spree which continued for at least 15 seconds. So, apart from the potential risk for life, limb and mental state, the woman’s actions had no punishing effect on the dog’s pulling behaviour anyway. Her yanking and berating started far too late for the dog to make any association with his earlier behaviour.

It was a classic example of how a person’s lack of understanding of animal learning and dog behaviour can lead them to be cruel to their dog. The woman seemed “offended” by her dog’s pulling as if he should somehow “understand” what she expected from him. Humans often make that mistake with other humans. Assuming to know what another person knows or thinks seems to be the default setting in our brains and it is very hard to break the habit. Unfortunately, it causes a lot of unnecessary distress and disharmony.
You would think it was less intuitive for us to make assumptions about what other (non-human) animals think. But our brains are just not wired that way. It requires conscious effort to remember that dogs don’t do things to annoy us but because they engage in normal dog behaviour.

“Take a deep breath and get a front-clip dog walking harness. Grab a handful of tasty treats and start training.”

So, before you get frustrated with your dog’s pulling on lead and reach for a choke chain or other grisly gadget, before you lose your temper and yank your dog around by the neck, take a deep breath and get a front-clip dog walking harness. And if this doesn’t reduce the pulling enough for you, grab a handful of tasty treats and start training.

Walking on leash: How to be in sync with your dog

MORE ON THIS TOPIC

One Jerk Can Cause a Lot of Damage, Dr Peter Dobias
Pulling on Leash (8 Common Dog Training Mistakes), Michael Baugh
Get Your Dog Into A Front-Clip Harness (The Easy Way), Madelyn Krkljus (Tails in The Valley)
Harness the Love – Tips for On-Leash Walking, Allison Wells (I Love Your Dog)
Do no-pull harnesses work? Ask a sled dog or two., Kristi Benson
Harnesses are a Great Choice to Walk Your Dog, Zazie Todd (Companion Animal Psychology)